We're slowly settling in and furnishing our gigantic home. It's looking pretty full to be honest. Now I worry about what we will do with all this furniture when we eventually move... some pieces I will definitely keep forever though, like... my new Scandinavian armchairs!! Spotted online, delivered from Reims to Paris by the seller, then delivered from Paris to Munster by our lovely friends who kindly agreed to visit us for the weekend and bring them. Don't worry though, they were rewarded with large quantities of white wine, beer, cheese and other Alsacian delights. 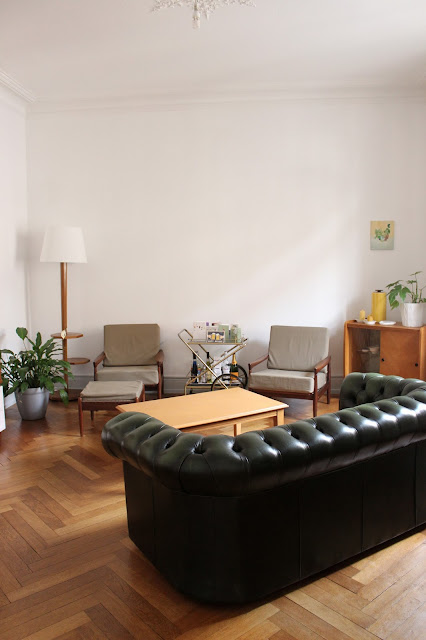 I would also like to introduce... my massive living room lamp that came with a hideous lampshade I forgot to take pictures of. 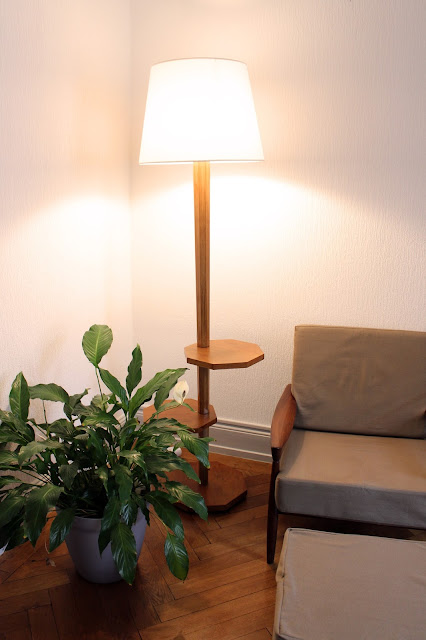 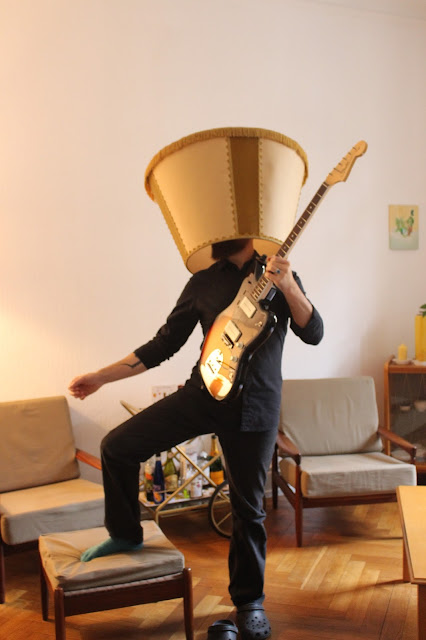 I DO have a picture of it. Just not in its original context. Anyway, moving on... 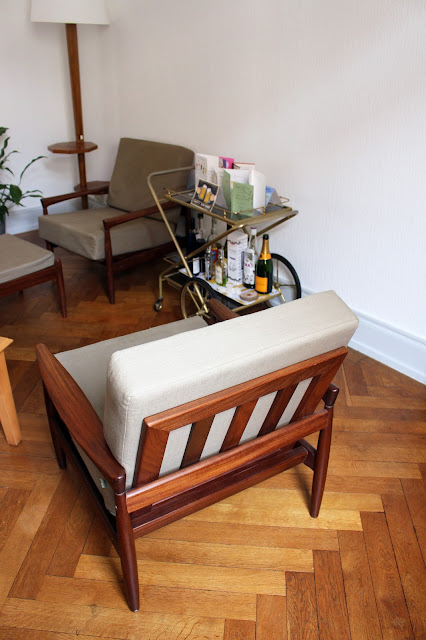 The chairs look as good from the back as they do from the front. I had originally planned to leave the sofa where it was against the wall and to place these directly across from it, so you could see their backs from the dining room. The fact that the seller threw a footstool (that I really love using now that I'm an old lady) in for free has confused me to no end and I'm really not sure about this setup but I've decided to live with it for a while and see. 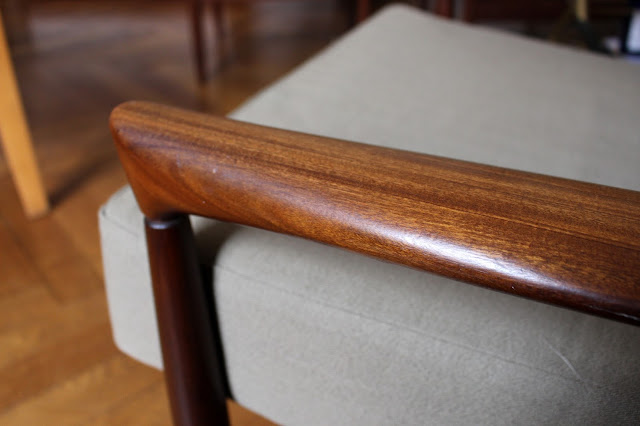 Prettyyyyyyyy... I'm not a huge fan of the covers though and I'm planning on recovering them as soon as h̶e̶l̶l̶ ̶f̶r̶e̶e̶z̶e̶s̶ ̶o̶v̶e̶r̶ I get round to it. Any colour suggestions? Something with a pattern? Something dark? Something light? I'm very new at choosing that kind of thing and don't know where to start. 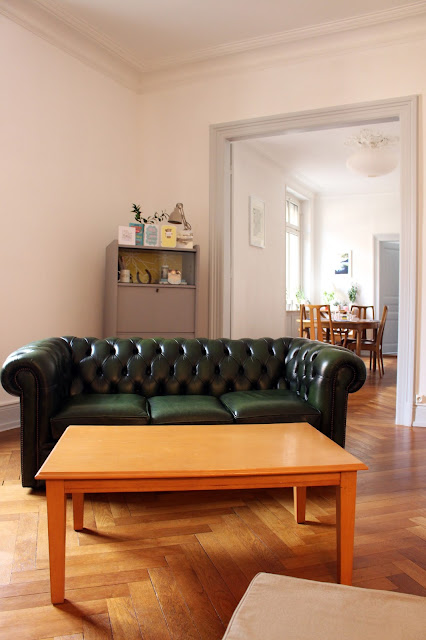 Please ignore the hideous coffee table and picture something with white marble and a modern vibe. I know exactly what it should look like, I just can't find it for sale anywhere. Marble is having a bit of a moment though, so hopefully soon! 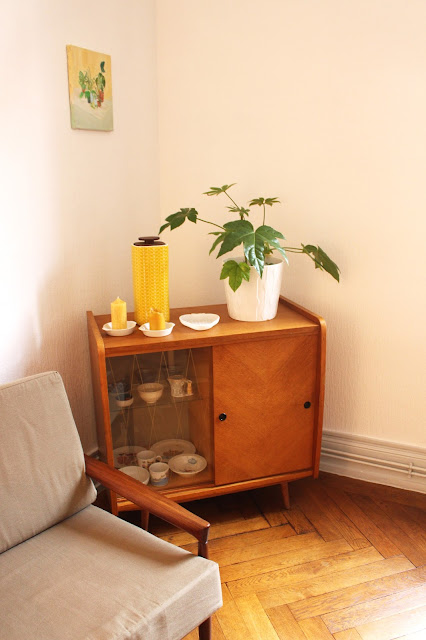 I still love my little cabinet and it's currently housing some Japanese finds from our stop in San Francisco, along with other little treasures and some pretty plates/bowls/cups that were given to me as christening presents when I was a baby! So random! The plant had a close call recently after a red spider invasion, but after several days of worrying and spraying and more spraying and more worrying, I think it's safe to say it's on the mend. 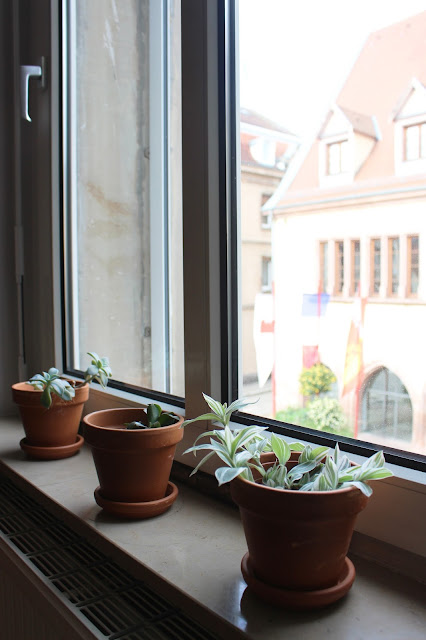 The many other plants are happy and thriving, thank you light! I missed you so much! 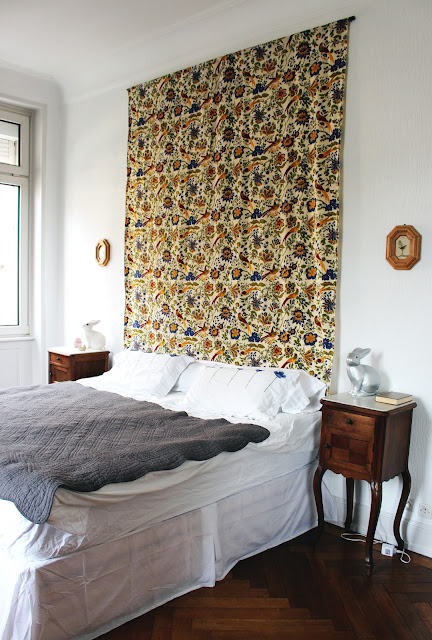 On the bedroom front, I found some nice marble-topped nightstands for a steal (all this "new" furniture is from houses in town that are being emptied to be put on the market. I think the more stuff you've inherited, the less you're interested in getting loads of money for it and there are some serious bargains to be had). Then I saw this idea on Pinterest and though, well why not? 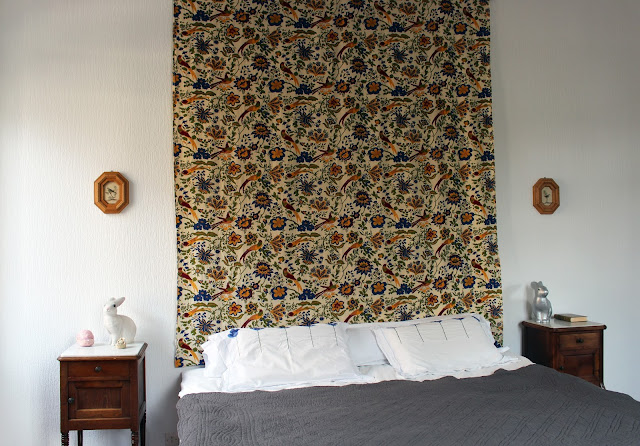 I love this bedroom. It's a shame we can't really use it as it's very very noisy. The road that goes past our flat is one of only two that lead out of the Munster valley, where there are lots of touristy things to do (skiing, hiking, riding loud motorbikes and quad bikes) as well as a few factories. The lorries that rumble past (on the cobbles, naturally) at 4AM every morning actually make the bed tremble. I've always been a light sleeper and I initially thought this was my chance at getting used to noise. After 4 months though, I can't even get a proper night's sleep in the guest bedroom next door to this one, even though it's much quieter. I do like to come in here and pretend to be royalty sometimes though.

Aaaaand, as of yesterday, it's the official home of our €40 solid wook (oak?) wardrobe! 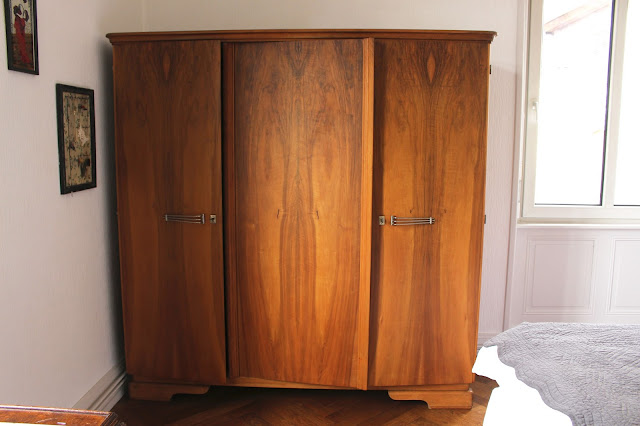 Also bought off the lady who sold us the big lamp. She gave us the matching nightstands too, but while cleaning them Boyfriend realised they were FULL of woodworm. The wardrobe has a few holes in the base so he treated it before we installed it, but the nightstands are too far gone to be used safely. They're now in the cellar waiting to be taken to... the tip? I don't know what to do with them! I don't think donating them is a good idea. They look great from the front but the backs are like Swiss cheese. 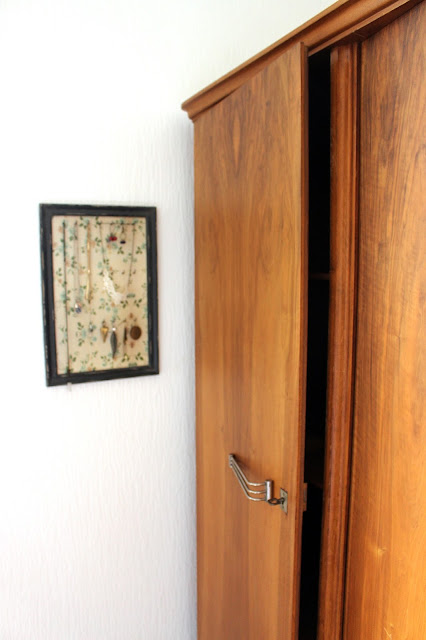 Anyway. I love my sixties wardrobe, even though we did let the big middle door crash to the floor while assembling it, shattering the mirror inside it and denting the floor... 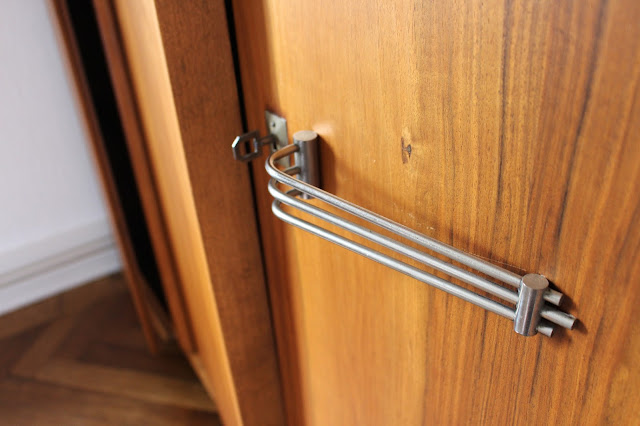 So that's about it really.
Next up: the kitchen!

One of these days you might get a full house tour too, but for that to happen I would have to tidy all the other rooms and run out of work, which hasn't happened since before the move. I'm not complaining though, more money to buy our dream-house with !