Yesterday as I left work to go to yoga, I spotted this: 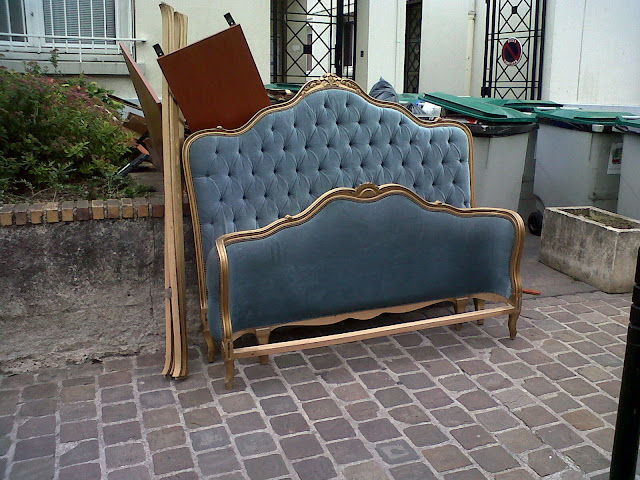 aaargh, isn't it pretty? I walked over and had a quick look and I thought it was in good condition. But my brain was obviously partly frozen and not working properly. I hesitated, I snapped a picture, and I left! (silly silly bunny) I didn't want to miss yoga and I had no idea how to get the bed home. Boyfriend had an appointment at 6PM and there was no way I was coming back in the car after yoga without even knowing whether the bed was still there or not. (for the record, we both have a 1-hour commute to and from work and we both take public transport. We only use our car to go grocery shopping or on weekends/holidays. Being stuck in Parisian traffic is my idea of hell.) Why didn't I think to run back to work and get four strong colleagues to carry it into the car park? Why? because I'm a silly bunny and silly bunnies aren't good at handling beautiful abandonned furniture emergencies, I guess.

I posted the bed on facebook, I texted it to Boyfriend, I moaned and moaned, and guess what? When I checked my phone after yoga I had a message from my dearest: "Gone to fetch the bed, It's probably still there" (cue collective "aaaaaaaaaaah"). Well the good news is, it was. Sort of. Half of it was still there. The footboard and the frame (In other words, the crappier half). I can't believe someone came along and took my headboard!! The bad news is, you can't really do much with a footboard and two pieces of wood. It would need reupholstering which would cost a bomb, and then what? It's too narrow for us to use as a headboard for our bed, it would be perfect for the guest bed but it would need to stand about a meter high. Without becoming ugly. I just can't think how to use it.

The best idea I've come up with so far is to strip it, keeping only the wooden frame which is in great condition, make it weatherproof and turn it into a sort of bench/plant shelf for the balcony. What do you think? Any other ideas? I'm kind of desperate here...